There are forces that exist outside our perceptions of reality, unseen and beyond the scope of mortal understanding. Long ago these powers were mastered and wielded by a scarce few who knew well the secrets of the old ways, secrets that have been hidden for aeons. — Damon Darklore

The realm of illusion is steeped in centuries of mystique and darkness. The sorcerers of ancient times were believed to possess arcane knowledge that granted them supernatural powers to command and control the forces of nature. There are those who yet practice these lost arts, performing spellbinding feats to mystify and astound mortal eyes. And, if legends are to be believed, there exist an elite few who have unlocked the mysteries of the universe to discover the untold secrets of true magic.
Throughout your life you have been fascinated by tales of magical lore and stories of the fabled Theater of illusion. You have searched for years to discover the truth behind this elusive legend until, at last, your quest has brought you to a deserted manor house on a secluded country estate. You arrive in the midst of a raging thunderstorm on the evening of October 31st.
The old mansion once belonged to Doctor Arcana, the mysterious masked magician who captured the world's attention with his astounding illusions and spectacular, death-defying escapes, only to vanish into oblivion decades ago, never to be seen again. Numerous rumors have circulated concerning his whereabouts and fate, but the truth remains a mystery to this day. Some tales speak of a secret theater hidden inside Arcana Manor, where the dark arts are performed, but no living soul has been able to investigate the claims, and the mansion has stood abandoned and undisturbed for the past 21 years.
Certain that the answers you seek lie within the forsaken abode, you proceed to enter the mansion. As soon as you set foot inside the dilapidated entrance hall, the front the door slams shut behind you and a ghostly voice booms from the shadows.

"Welcome mortal. It has been so very long since anyone has entered this place. These hallowed halls have stood empty for decades, awaiting the arrival of one who could unlock their mysteries and discover the secrets they hold. The Fates have summoned you here on this night. Your destiny awaits."
You proceed to investigate the abandoned manor, exploring the shadowy, cobwebbed halls until you arrive at the master magician's library. A large book rests on an ornate stand in the center of the room. You wipe the dust from the book's cover to discover a familiar symbol etched in the brass lid. The strange circular emblem that adorns the ancient book is identical to the design on the pendant you wear around your neck. The mysterious golden medallion decorated with mystical symbols has been passed down through your family for generations, though its true origins remain unknown.
Curious, you open the ancient book and commence to read the handwritten text, and as you do, a fascinating tale begins to unfold...

We have walked among mankind since the dawn of time, commanding forces unknown to mortals, and bending time and space to our will. Our ancestors seldom made themselves known, choosing instead to remain in the shadows of history. Keeping their powers hidden, they existed among mortal men for centuries, meeting in secret gatherings beneath the cover of darkness. In the twilight mists of the Dark Ages, The Arcanum was born.
Each member of the Arcanum was given an amulet bestowed with ancient powers that acted as a mystical key to unlocking the hidden realms of the universe. The master architects created a theater with a gilded stage upon which members of The Arcanum could share their esoteric knowledge with one another. This legendary stage, known as the Theater of Illusion, was hidden outside of time, between the known spheres of reality, beyond the threshold of mortal perception.
Each Hallow's Eve, the members gathered for the Mysterium, a spellbinding display of the mystical arts performed by those who had mastered the secrets of true magic. Admittance to this exclusive event was restricted to members of the Arcanum. Attendance by outsiders has always been strictly forbidden.

Suddenly, you hear the murmur of voices echoing in the distance. The ghostly whispers beckon you to leave the library, leading you deeper into the unexplored regions of the mansion. Cobwebs drape the abandoned corridors and the walls are lined with antique playbills advertising history's most famous magicians. Your attention is drawn to an old theater poster surrounded by Egyptian hieroglyphs depicting ancient deities.
Once again, ghostly whispers echo in the distance and you follow their beckoning call to a long hallway with a solitary door at the far end. You open the heavy wooden door to discover a solid brick wall behind it. Puzzled, you close the door and notice a circular indentation in an ornate brass plaque beside the doorway. You place your medallion into the plaque and the amulet glows with a dim red light. Retrieving your amulet, you open the door again to discover a passage leading to an old theater with a dilapidated stage. Cautiously, you enter the phantom theater and make your way to the front row of seats. Shadows and gloom cloak the hall in darkness and the stale scent of decay fills the musty air. Dust covers the decrepit stage and paint peels away from the blackened walls.
As soon as you take your seat, the lights dim and eerie music begins to play. A blazing circle of fire suddenly appears in the darkness before your eyes, hovering several feet above the stage. The fire dissolves to reveal a sinister golden mask that remains suspended in mid air, as if worn by an invisible performer. An eerie red glow emanates from the eyes of the mask and a low voice echoes through the hall.

"Look deep into my eyes. Surrender to the sound of my voice. The world around you begins to fade. Darker...darker...gone. You have entered the shadow realm, a mysterious dimension hidden between time and space. Two grand doors stand before you, and as you approach, they open to reveal a magnificent stage, cloaked in darkness. Welcome to the Theater of Illusion, where dreams and nightmares come alive."
The golden mask is engulfed in a ring of fire and vanishes into smoke and shadows. When your eyes adjust to the darkness, you realize that the hall is now different. The decayed timbers that framed the stage have transformed to ornately carved woodwork, adorned with strange golden designs. A heavy curtain covers the stage in a cloak of dark red velvet. Sinister music begins to play as the curtain slowly rises and you sit mesmerized by the spectacle that unfolds before your eyes.
A shadow rises from the center of the mist-shrouded stage and takes the form of a human skeleton. The grim figure waves his bony arm through the vaporous haze and a large hourglass appears beside him. He strokes his skeletal fingers across the bottom of the hourglass and it instantly fills with blood-red sand. Once more, the phantom voice echoes through the theater.

"Time is fleeting. It slips away like the sands of an hourglass. Each grain, a precious memory that fades further into the past with each passing moment."
The skeleton walks to the side of the stage and overturns the hourglass and immediately transforms to stone. As the sand begins to run out, the music changes and the sinister cabaret begins.
An unearthly mist covers the floor of the stage and a dark figure, clad in a flowing cloak of crimson and black, emerges from the shadows. The necromancer raises his right hand and spectral flames flicker from his fingertips. He waves his hand above him, tracing strange symbols that ignite the air around him. The flaming designs float above him and on either side of him, casting writhing shadows onto the crimson curtains at the back of the stage.
Thunderous drums play a primitive rhythm and skeletal figures rise from the darkness as if summoned by the call. The necromancer makes hypnotic gestures with his hands and the shadows sway and dance to the voodoo rhythm. The flaming symbols converge at the center of the stage forming a ring of fire and a beautiful woman dressed in the silken robes of an ancient priestess appears in the midst of the blazing inferno. The skeletal shadows meld together to form monstrous black beasts silhouetted against the scarlet curtains. The nightmarish creatures surround the circle of fire and the dark magician vanishes into smoke. 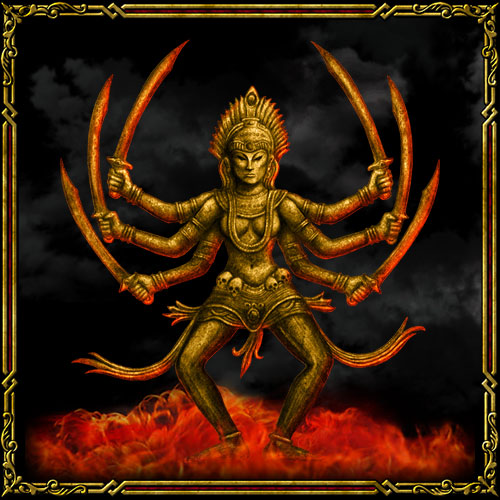 A large golden statue of the goddess Kali appears inside the flaming ring. The six-armed idol towers over the priestess who bows before the statue and begins to chant strange invocations. Kali's eyes glow with an unearthly fire and the idol comes to life. Each of the statue's arms wields a burning saber that leaves a trail of fire as it slices through the air. The golden idol slashes at the howling black beasts and skeletal figures, and the shadows dissolve to dust and smoke.
A blinding bolt of lightning announces the arrival of another master magician as a white-haired wizard from the Orient appears at the far the side of the stage. The old sorcerer waves a jeweled wand before him and the blazing circle surrounding Kali begins to collapse. The priestess and the golden idol disappear as the ring of fire fades. Another wave of his wand manifests a flickering black flame that floats through the air at the wizard's command.
The conjurer whispers a sinister invocation and the black fire begins to grow larger and change shape, assuming the form of an enormous dragon. The beast spreads its ebon wings, covering the stage in burning shadows, and you feel the searing heat of the unearthly flames. The ancient sorcerer points in your direction and the hellish creature turns his head to face you. Suddenly, the skeleton standing beside the stage begins to move again. It holds the crimson hourglass in its outstretched arm, allowing you to see that the sand has nearly run out. The shadow dragon lunges toward you, its fiery jaws open wide, but as the last scarlet grains trickle to the bottom of the hourglass, the stage is engulfed in darkness.
The eerie silence of the empty hall is interrupted by whispering voices that beckon you further into the shadows. Beyond the theater stage, you discover a secret door. You enter it and follow a dark, twisting passage that leads down to an ancient ritual chamber illuminated by torchlight. Strange inscriptions adorn the walls and mystic symbols surround a large crimson circle on the stone floor. Masked figures cloaked in black silently emerge from the shadows, and as they do, you step forward to take your rightful place among them.