Explore a gothic realm of vampires, ghosts, dark angels and living gargoyles with this dark symphony of the night, based on Joseph Vargo's DARK TOWER book series. 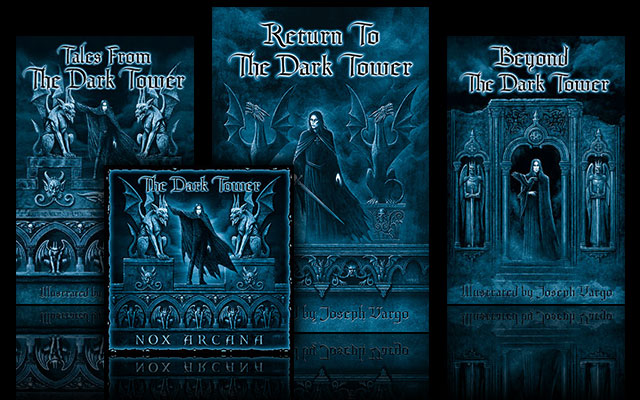 Born of the Night, they lurk in the shadows—gargoyles of living stone, lost souls who wander mist-shrouded cemeteries, and vampires who dwell deep within forbidden crypts. They are the spirits that haunt the blackest wells of midnight—trapped between the realms of the living and the dead, forsaken and cursed to forever dwell beneath the shadow of The Dark Tower.
Nox Arcana invites you to explore a realm of gothic mystery, horror and romance with this dark symphony of the night. Eerie piano and pipe organ melodies echo through haunted halls, ghostly choirs chant to the rhythm of tolling bells, epic orchestrations stir powerful emotions, while the cries of wolves, ravens and restless spirits echo in the dead of night.
The Dark Tower marks Nox Arcana's 16th concept album, each of which offers a unique and different Gothic theme. Joseph Vargo brings his dark visions to life with his masterful blend of haunting melodies, ominous orchestrations and chilling sound effects, creating a brooding soundtrack of mystery and menace for his Dark Tower book series.

The latest musical adventure from Nox Arcana is The Dark Tower. It's got all the dread and doom one expects from Nox Arcana, delivered with a sense of beauty that one might not anticipate. Sure, this is creepy music that's best appreciated around the time of Halloween, but it’s also very beautiful and powerful.

Chock-full of the scary musical excellence that Nox Arcana is known for. So whether it’s for home haunting, Halloween displays or just some musical accompaniment to Tales From The Dark Tower, you definitely want to pick up this album.

The latest, long-anticipated release from Nox Arcana offers a monumental musical journey though the mysteries of The Dark Tower, the haunted domain of vampires and forlorn spirits. Joseph Vargo, who composes and performs all of the music for this one-man-band, also creates the stunningly creepy artwork for the cd booklet. The concept follows the stories in Vargo's book, Tales From The Dark Tower, providing a gothic soundscape of sinister pipe organs, tolling bells and chanting choirs. Vargo's compositions are indeed darksome, mystic and haunting. Majestic piano passages combine with romantic and ominous symphonic melodies to create an atmosphere of melancholy and horror. Ghostly voices whisper in the wind and deliver warnings to those who would dare enter this domain of the dead. The haunting tracks evoke a sense of dread for that which lurks around each corner of the numerous chambers of The Dark Tower, and illustrates perfectly the forlorn shadow-kingdom where darkness and other sinister forces dwell. Just imagine the symphonic instrumentals of various Black Metal bands such as Cradle of Filth, and you will have a sense of Nox Arcana's music. The music itself is extremely well-composed and offers a perfect accompaniment for dark literature. Although Nox Arcana is not classified as Heavy Metal music, I am quite sure that lovers of Gothic and Black Metal will surely love this band's dark music and art!

It has been almost a year since we got to take a musical journey into the unknown, with Nox Arcana leading the way. But since Joseph Vargo is busy doing so much, with many other projects. Two of those had come together in the form of an anthology of stories based on his artwork. Vargo, along with several other writers contributed 13 tales of gothic traditions. So what does this have to do with this CD? Simple. Because Nox Arcana has created a soundtrack for this book. Each of the 21 tracks features a theme from one of the stories. Such as "Vampire's Kiss" or "Dark Desire," this cd gives you an audio accompaniment to the stories as you read them. And just like all of Nox Arcana's work, as you play the cd, you are waiting for the fog to slowly seem out of your speakers, filling the room with a dark mist, waiting for a dark intruder to enter. From the use of echoing pianos, to the haunting voices, they have again created a very memorable piece of music. We get a range of music, from the slow and eerie to the more fast paced, tension building pieces. Like all of their work, this comes highly recommended.

The Dark Tower5 Whoo. Crept me out.

Reminded me to buy better locks and fill two egg cartons with holy water balloons. I'd like to hear this music at my home church. This music's instrumentation and chanted vocals is worthy of the acoustics of this Neogothic structure. "Please, Father, this is classical stuff and it will remind us eloquently and efficiently to keep our souls shiny."

The Dark Tower5 Their best album

I discovered Nox Arcana a few years ago around Halloween. I personally think this is the best album simply because it's the most varied. Sometimes it can be hard to tell where one song ends and another begins, but that can't be said this time.

That's really all that needs to be said.

I have all their stuffs, as they say in Hawaii. Stuffs. Haven't even listened to samples. Don't need to. Will add this to my collection of Nox Arcana in the AM and I'm sure I'll love it.

This album is so dark and powerful its amazing its a must have and buy !!!