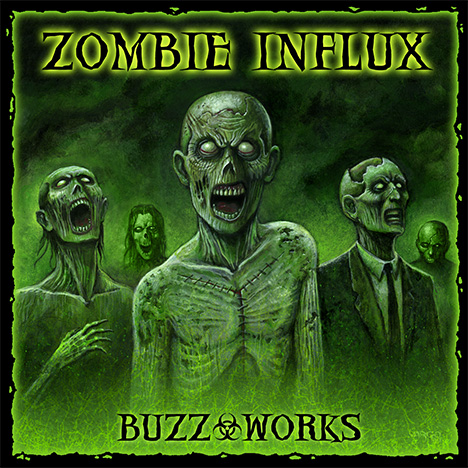 Experience the horror and panic of a zombie invasion.

The dead are rising from their graves in search of human prey...

Sharpen your axes, barricade your doors! Zombie Influx brings the living dead to your doorstep with this creepy concept album that creates the horror and panic of a zombie invasion through the use of frantic emergency news broadcasts, ambient sound effect tracks and ominous cinematic music.
A lifelong fan of George Romero's classic zombie films, as well as Sam Raimi's "Evil Dead" series, Jeff Hartz (Buzz-Works) was inspired to create Zombie Influx as a tribute to the movies that warped his mind. Teaming with Joseph Vargo and William Piotrowski of Nox Arcana, they set out to capture the terror of a zombie invasion along the lines of the 1938 "War of the Worlds" radio broadcast. The result is a dark atmospheric soundscape that paints a bleak portrait of a world ravaged by the living dead.

Zombie Influx is a must for anyone that is looking for that creepy Halloween background music. This is a balls-out creep-fest.

During the listening of this CD you will have a chance to feel living dead all around you and various samples will possessed you with panic, fear and other similar unpleasing emotions.

Collaborating with Nox Arcana, Jeff Hartz has created a fun little audio tribute to George Romero and the zombie genre. Along with some good atmospheric background music, this CD has news reports about the doomsday virus which seems to be taking over the world. If a zombie outbreak was to really happen, this would be the soundtrack. As usual with anything Nox Arcana is involved with, the production value is top notch and great to have this playing in the background

This excellent opus is a dramatic journey into classic horror sure to consume your mind with morbid entertainment perfect for Halloween adventures, celebrations, and otherwise whenever in the mood for thrills and chills. A must for Zombie aficionados.

Zombie Influx is an amazing album that makes the listener feel like they're inside an 80's zombie epic.

this reminds me of left 4 dead and it look like the same artest that made nox arcana's alblem covers. I must say it does make you think of zombie invasions the only question is how long will you survive to tell the tell hahhahahahahahahahahaha

It's a great cd, especially if you're a zombie fan.

This is definitely worth the purchase if you enjoy the ambient sonic atmospherics that you might experience while playing horror video games (or appreciate the soundtracks of zombie flicks of the 60's, 70's and 80's). Occasionally it gets a little cheesey,..but for the most part it creates a very unsettling mood. Fans of early John Carpenter and George Romero would find this to be an entertaining addition to their soundtrack collection. Alot of the audio here is slightly unnerving background atmosphere (although the odd "fake news feed" is tossed in occasionally..for added "effect"). As such,..don't expect to find any real "songs" here. Close your eyes and picture darkened, abandoned avenues...you are walking by yourself...looking for something.....suddently you hear a noise behind you...."Who's There?" (you ask).......a drip of rainwater splashes into the gutter...you wonder where everyone else could have gone.......an unpleasant smell meets your nose...you notice the strange abscence of the familar sounds of automobiles and people on the streets......then you hear a strange "shuffling" sound coming from a nearby darkened alley... faintly at first then getting slowly louder...... you are ALL alone... or... ARE YOU??

Great album, really brings the thought of a zombie apocalpse to life. If your not going to buy the whole ablum then defineitly buy: The Feeding Post Mortem The Pain of Dying Armageddon Flesh Eaters Zombie Influx